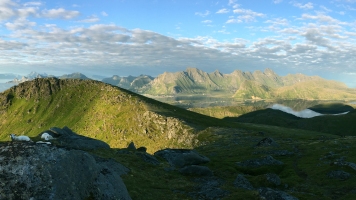 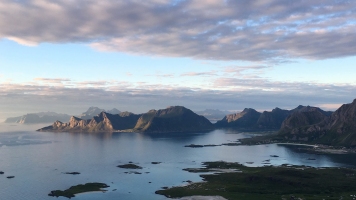 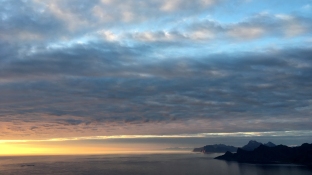 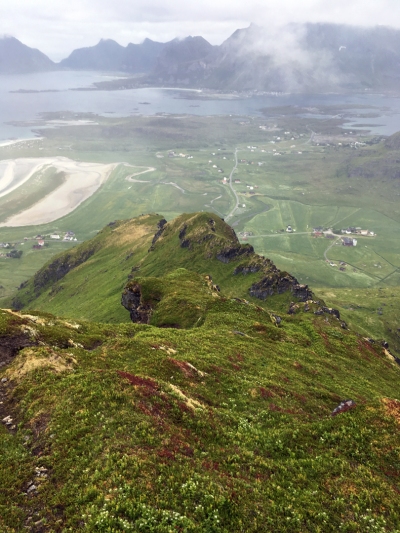 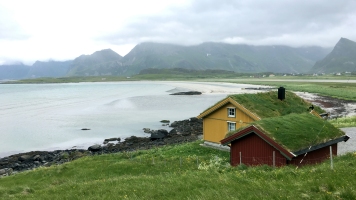 In early July 2018 we arrived just outside of Fredvang in the Lofoten Islands, Norway. Drizzly rain and low cloud is common at this time of year, but we were greeted by a stunning blue bird day with the sun high in the sky. After checking into our AirBNB on a farm in Indresand I realised this could be the only chance to actually see the midnight sun dip to the horizon at midnight. The only catch was the sun was heading behind the mountains above Kvalvika Beach, blocking our view.

After dinner around 8pm I started the hike up towards the peak of Ryten, rising 543m straight out of the sea. The walking was relatively easy despite being a constant steep climb, with amazing views down to Kvalvika Beach on the ascent. Quite a few other people seemed to have the same idea, so by the time I reached the peak at about 10:30pm there were various groups straddling the cliff for prime time viewing.

I’d only packed a 35lt day pack with my bivvy bag, Thermarest, light sleeping bag and Jetboil for cooking breakfast, so found a nice sheltered spot behind a rock away from the crowds and set up for the “night”.

As the minutes ticked towards midnight, the sun tracked due North, creating an epic sunset view looking back way across the sound to the peaks around Bodø. Leaving the herd of sheep that were keeping me company, I then hiked down the ridge to Middagstinden with sweeping views down Stokkvikdalen on one side and across the bay to Ramberg on the other.

Unfortunately, a band of cloud obscured the sun as midnight approached, but it still provided an amazing light show with shafts of light striking the cliffs towards the North East. I clambered back up to the bivvy, put on my eye mask and hunkered down for some sleep despite it still being bright daylight outside.

Waking up around 6am I realised the weather had really come in and the bivvy was being pounded by wind and a thick blanket of sea cloud had set in around the peaks. The bivvy was pretty wet on the outside but I was warm and dry inside, so spent a while psyching up to get back out into the weather and find my way down.

It was only then that I remembered today was Friday morning – the day I’d scheduled a freakin’ work conference call weeks beforehand. I had a few bars of mobile battery left, but only an intermitted 4G signal, plus the wind was hammering in over the cliffs. I clambered down the opposite side of the ridge, found a signal and dialled in hoping the connection would hold. “How’s your trip going Owen?”. “Oh, fine thanks – I’m just perched on the edge of a cliff in the Arctic Circle!”. 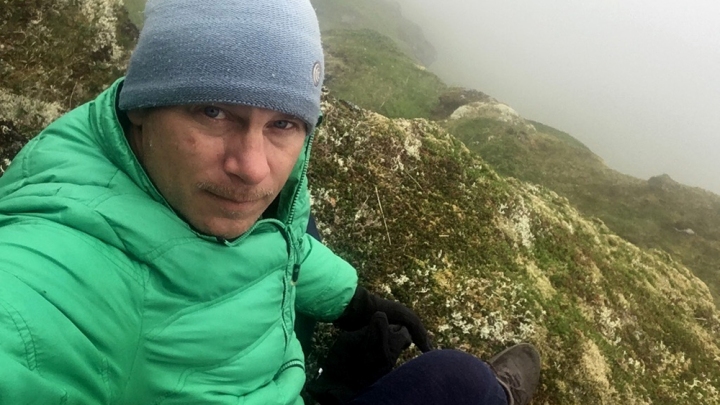 The next challenge was getting down now that the grass and moss was a slippery sheen and I had 500m vertical of razorback ridges to navigate back to Indresand. I followed what I thought would be the safest way down, only to hit a cliff band that I needed to hike back up and around before finding a keyhole through the cliffs to get down in one piece.

Word to the wise – yes, you do need to pack that Goretex shell no matter how clear it is when you set out, and low cut hiking shoes are no match for soggy grass – even with hiking poles!

2 thoughts on “Chasing the Midnight Sun”

This site uses Akismet to reduce spam. Learn how your comment data is processed.